Posted by mybiggeekadventure on January 3, 2017 in Geek Adventure, General Musings | Leave a comment

Do you know what’s a fun way to end the year? Falling down the stairs and walloping your back off the edge before crumpling into a heap at the bottom. It’s great!

I’m lying of course, it’s a shit way to end the year and I wouldn’t recommend it to anyone. I was left hobbling around like an old woman whilst curtailing my festive social calendar somewhat. It did however, give me plenty of time to lie about on the couch and reflect on the year gone by.

It is universally accepted that 2016 has sucked. So many icons have died, we as a species have put up more walls between us than ever and generally people have struggled to stay positive.

For my own sanity, I couldn’t spend New Year looking back at 2016 and feel bad about it. There was some good points and, for me personally, there were some fantastic Geek Adventure highlights. So I thought I would remind myself of the year that was by sharing these highlights with you. If you have a list of fun achievements you would like to share, I’d love to hear about it.

January 2016 started off quietly with lots of groundwork being laid for the rest of the year. This included pouncing on tickets for Glasgow Film Festival’s showing of Con Air at a secret location. If you are anywhere near Glasgow during February in any given year, I would heartily recommend trying to attend some of the GFF events. I’ve already got some tickets booked for 2017 which I’ll share more details about soon.

A must in any film buffs calendar

March saw Husband and I teaming up with some friends and getting our Sherlock on at Tick Tock Unlock, a locked room experience that challenges the old grey cells and encourages you to work together as a team. It’s the perfect rainy day fun activity and there seems to be a new themed room popping up every month around the country.

April came and went and May began with a trip to the Cosmic Garden of Speculation. The garden is only open one afternoon in the whole year so we donned our wellies and many, many layers to check it out. If you can make it on the one day it’s open in 2017, it is definitely worth a look. May also brought David Duchovny to Glasgow and my teenage self swooned. 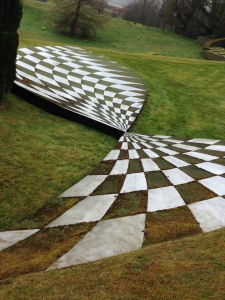 My first ever trip to Germany came in June when I found out that my Captain, none other than Nathan Fillion was going to appear at Germany Comic Con. Things to note about Germany; (a) German people are lovely (b) they speak English better than we do and (c) they throw very efficient and well run comic cons. 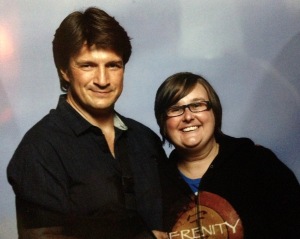 July was spent on the couch but wishing I was in San Diego for SDCC. The trailer releases alone left me wanting more! Thank goodness for the internet and being able to watch pretty much all the panels in Hall H from the comfort of your own home.

So much happened in August that it boggles my brain. I released my second book, The Road to Nerdvana (I thought I’d climbed a mountain writing one book, never mind two!) and I met not only another Hobbit but Mr Peter Mayhew, Chewbacca himself, at Glasgow Film and Comic Con. 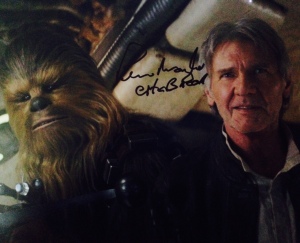 I love that he wrote ‘Chewbacca’ underneath, like I wouldn’t know who he was!

September was spent chilling out after the flurry of book activity and we visited Latvia for the very first time.

An unexpected opportunity for Husband and I to be in the audience for The Grand Tour filming meant a last minute jaunt to one of my favourite places in the world,Whitby, in October. I’ve been lucky enough to travel to lots of places around the world so far but Whitby continues to be my favourite.

I finished off the year in December by being introduced to a lovely bunch of ladies at the Glasgow chapter of Geek Girl Brunch.

Just the very act of writing all of this down has made 2016 seem like a better memory and made me SUPER EXCITED for what is coming in 2017. I already have booked/planned a few things so will share these with you in my next post. I hope you had a wonderful New Year and are excited about what 2017 may bring.