Home » England » Another tick off the list – Vampire Hunting in Whitby 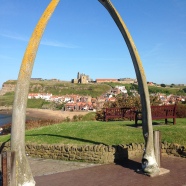 Another tick off the list – Vampire Hunting in Whitby

After a heavy week of editing and re-writes, I was desperate to use up the rest of my holiday days to do something fun. So Husband and I decided to jump in the car and head to Whitby for the day to cross another item off the list.

Before we got to Whitby, I was expecting another faded seaside resort which no longer lived up to it’s glory days. What we found though, was quite the opposite.  A busy fishing town filled with independent shops and more places to eat than you could shake a mackerel at. Yes, there were the obligatory amusement arcades for the kids but overall, Whitby was the perfect place to stroll around on a hot summers evening.

The reason we had travelled for six hours though was to search out the legend of the vampire.  Bram Stoker had famously gotten inspiration for his novel Dracula while staying in the Royal Hotel and looking out to the waves crashing against the rocks on a stormy evening.  The town had embraced this legacy and we were there to soak up the atmosphere (and maybe spot some of the undead)?  I had my stake (well an HB pencil that I had found at the bottom of my bag) and I was ready to rock!

We arrived late in the afternoon, checked in to our B&B and with lots of daylight left, we decided to explore the town. Walking the short distance to the seafront, we were greeted with this beautiful sight.

The beautiful view across the bay in Whitby

The town was busy, with lots of couples strolling along the front and we could see families on the beach below.  On the trail of the fanged ones, we wandered down into the town centre and over the bridge to the old town.  The cobbled streets and numerous winding alleys reminded me of an older time, a time when ladies in corsets would walk these streets, perhaps in fear of THE VAMPYR.

I was here to get a feel for the place and what better way to do that than go on a walking tour?

Our tour was guided by Harry, an older gentleman, with a voice and demenour more suited to a Shakespearean play than a walk around a sunny seaside town but he kept us and about twenty other people entertained with tales of the more ghoulish aspects of the towns history. Tales of dead mans hands, witches that could transform into cats and a haunted lighthouse.  As we wandered the town, I was amazed at just how close everything was.  Each road led off into several tiny alleyways and at one point we had to walk single file between two houses to get to an even smaller alley.  Perfect hunting ground for a bloodsucker looking for dinner!

I was tempted to take some pictures of our guide as we took our tour but he asked us not to.  Perhaps because he wouldn’t have shown up in the pictures?

The vampire connection has no doubt given Whitby a very interesting tourism stream with the town being taken over by Goths every year at the Whitby Goth Weekend.

During our time in Whitby, one thing was constant and that was the Abbey, which overlooked the town from every angle.  We were told that there are many tourists that climb the 199 steps to the Abbey in search of Dracula’s grave, forgetting that he was a fictional character (OR WAS HE??)

We left at lunchtime the next day (for reasons I will explain in my next post) after falling in love with the town of Whitby and I would definitely go back, with or without the vampire connection.

← The scariest chapter of the Adventure so far…. Being a Browncoat is goram shiny! →